10 Fantastic Places to Visit in the Montesinho Natural Park 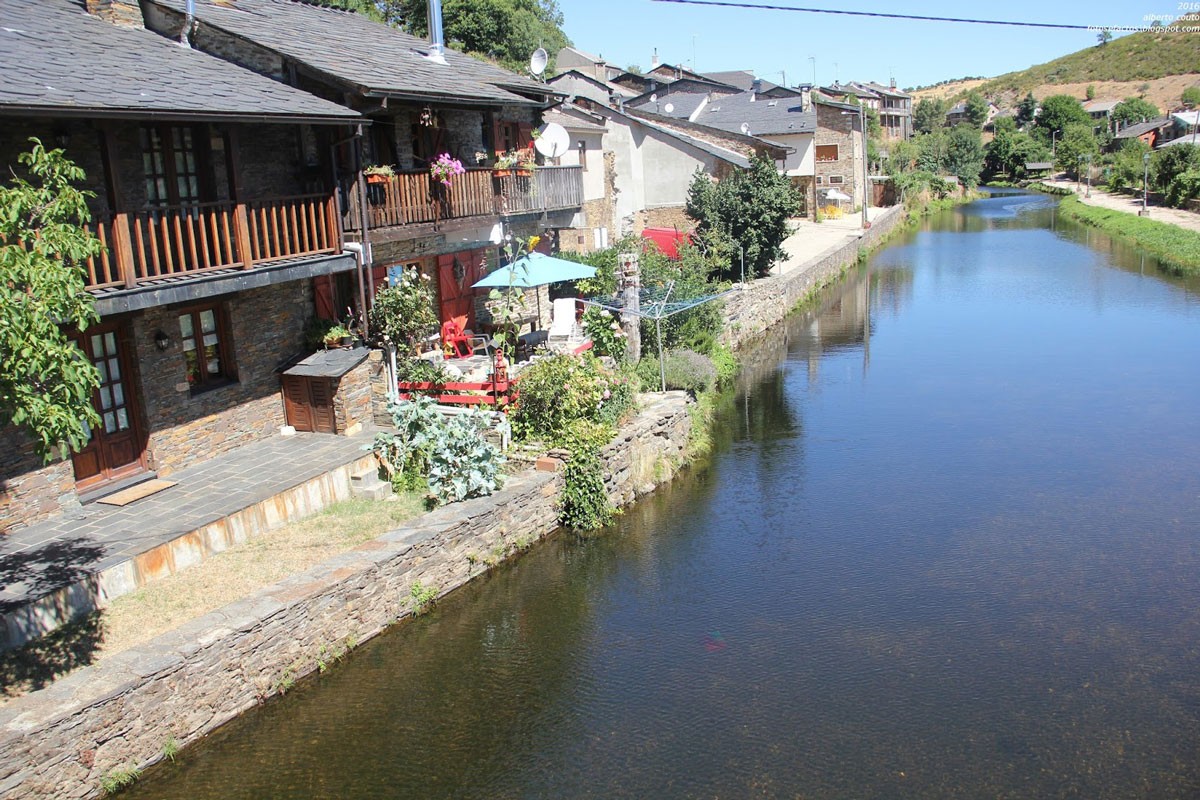 Rio de Onor, a small village in the municipality of Bragança, in the extreme northeast of Portugal. It is crossed by the river with the same name, which, serving as a border line with Spain, divides the town into two parts: one Portuguese and one Spanish.
The population of both parties, who live mainly from agriculture and cattle-raising, move and work the fields regardless, whether they are on the border here or on the border. Using its own dialect (the Riodonese), it still maintains the community regime in the rural administration. This regime is practically the only living example of medieval communitarianism.

Montesinho is a typical transmontana village, located in the foothills of the Serra de Montesinho, about 1000 meters high, in the Montesinho Natural Park. Let the serenity of this village seduce you and spend a few days in one of the granite houses adapted for tourism, with slate roofs and wooden balconies, open to the mountains!
Walk the cobbled and well-kept village streets and discover the Montesinho Church, the Montesinho Interpretive Nucleus and the Museum set up in a typical transmontana house, where you can learn about the geological characterization of Montesinho and the traditional ways of life of this “preserved village”. ” 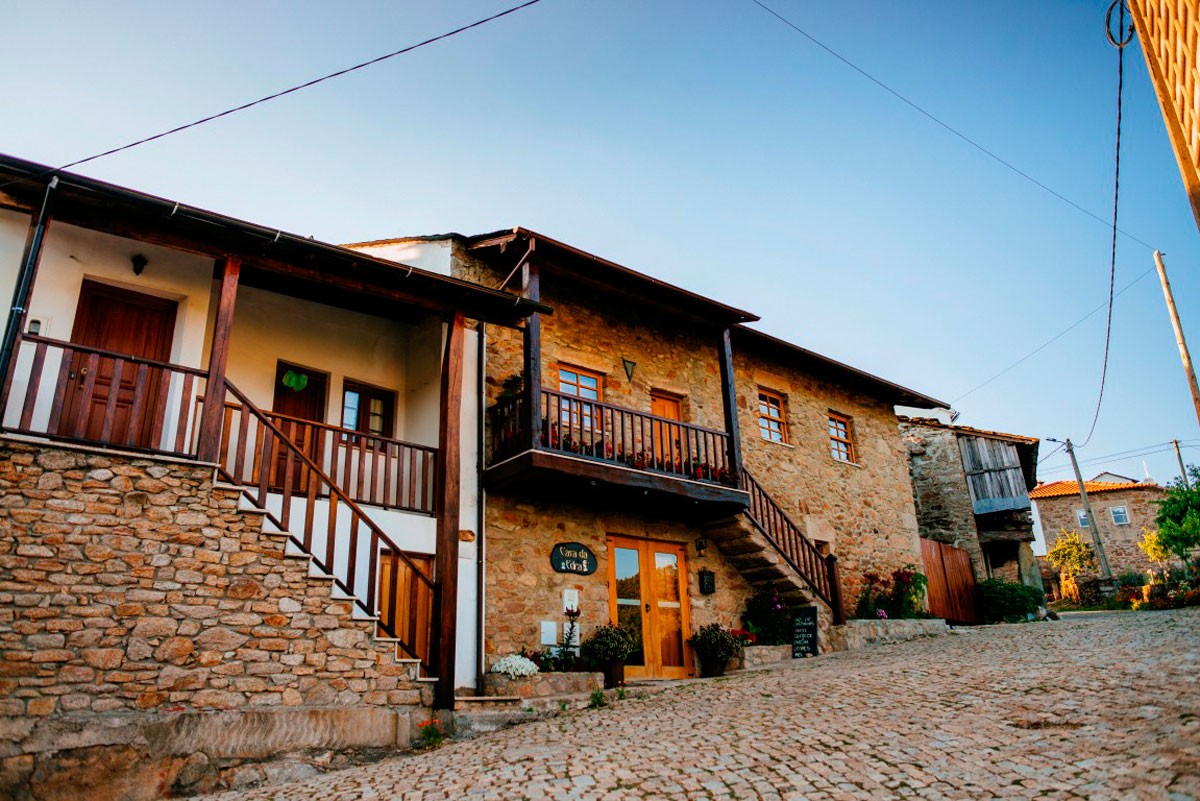 Located in the municipality of Bragança, Gimonde offers to those who visit it the best and most genuine of the transmontana cold earth, always with the human warmth and the art of welcoming of its inhabitants.
Gimonde’s superb landscapes, heritage and picturesque countryside make it the ideal place for a weekend getaway or vacation, in full communion with nature.
This is the village where we are located, and where you can stay in our houses and enjoy the Transmontana cuisine in the D. Roberto Typical Restaurant.

The Vinhais Biological Park (PBV) is a public facility, installed by the Vinhais City Hall in Prada Forest Nursery, a place included in the Serra da Coroa Forest Perimeter, just 3km from the center of Vinhais and in the Montesinho Natural Park.
Its purpose is the interpretation of the landscape of the region in its natural components (fauna, flora and geology), cultural and historical; nature conservation, the promotion of biodiversity and ecotourism.

The medieval urban core of Bragança, walled and castellated in the 12th century, remains in the Citadel, dignified by the imposing Castle Keep, the Pillory, the Santa Maria Church and the Domus Municipalis, the only building on the Iberian Peninsula. Romanesque architecture, shaped like an irregular pentagon, built in the twelfth century, and the Princess Tower, a magnificent viewpoint overlooking the city.
Already outside the Bragantina citadel, the city center is made up of excellent monuments worthy of note such as the beautiful Sé Square, the 1689 Cruise, the 16th Century Sé Cathedral and the 18th Century Calaínhos Palace. The religious heritage is equally rich, as can be seen in the Churches of Misericórdia, São Bento, São Vicente, or the Convent and Church of São Francisco and, outside the center, the important Church of the Castro de Avelãs Monastery of the century XII. 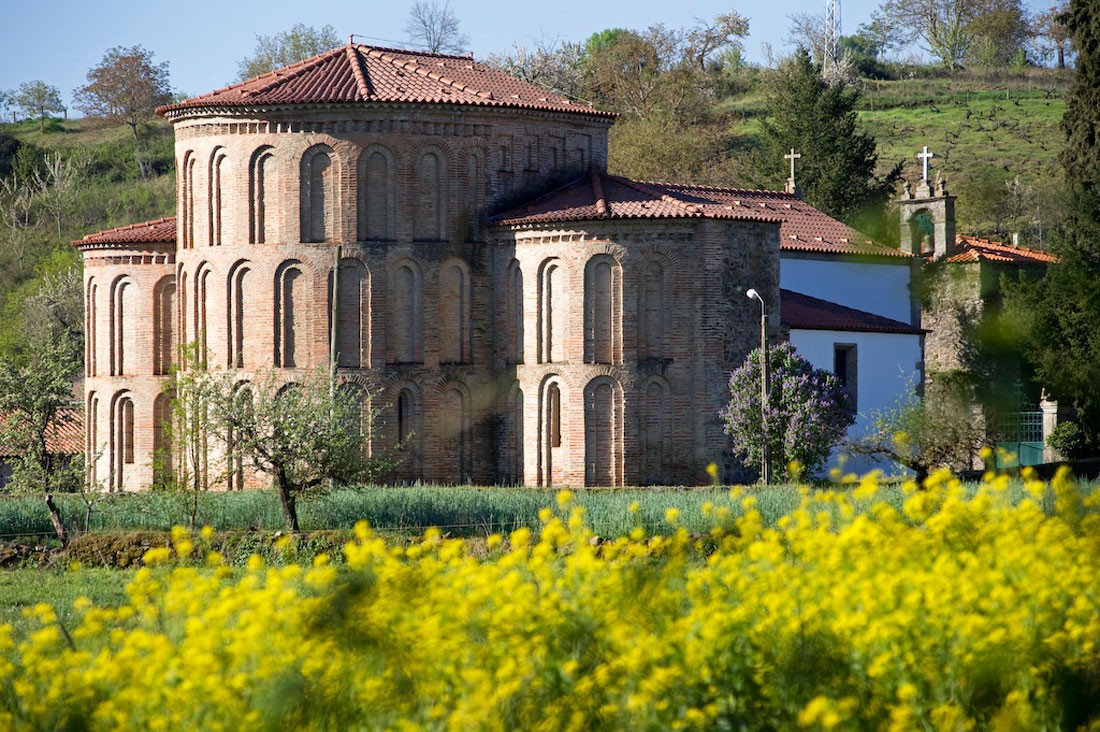 Guadramil is a typical transmontana village of Bragança district in the parish of Rio de Onor. Community village in the Natural Park of Montesinho, maintains the houses of typical moth and a practically extinct dialect called Guadramilês. It is a typical Portuguese village that struggles with the lack of population. It borders two Spanish villages, Riomanzanas and Santa Cruz de Los Cuerragos and three Portuguese villages: Rio de Onor, Deilão and Petisqueira.
This village was, for many years, a community village, where its inhabitants shared the mill, the forge, the herd and some agricultural tasks. It is currently inhabited by about thirty people, all of them quite old. There is no flock anymore, the mill no longer grinds, the iron is no longer cast in the forge, the fields are abandoned.

Puebla de Sanabria (in Portuguese: Póvoa de Seabra) is a Raian municipality of Spain in the province of Zamora, autonomous community of Castile and Leon. It belongs to the network of the most beautiful villages in Spain. It borders Galicia in Padornelo, having as its main link the Autovia das Rias Baixas, which makes the transition between the two communities through a tunnel. Its most direct connection to Portugal is via the road that goes to the Portelo border, near the Montesinho mountain range, north of Bragança.
The lands of Seabra, for its rich landscape and flora and fauna, is classified as a Natural Park. One of the jewels of this park is the lake of Sanabria, inserted in the Tera river valley, which along its route knows several dams, from its source in the Peña Trevinca mountain near the lake, an elevation that reaches 2 124 meters in altitude. Not far away, in the nearby Serra Segundera, rises the Tuela River, one of the tributaries of the Tua River.

In the heart of the Montesinho Natural Park, in the municipality of Vinhas, lies Gondesende, one of the most beautiful and typical villages in the region. Their once degraded stone houses have been the subject of intervention and restoration by their owners, especially for rural tourism. Walking the streets of Gondesende is a return to the past.
From this beautiful village you can head towards the discovery of the Montesinho Natural Park. You can use the many signposted walking trails that pass or depart from Gondesende, or you can simply set off on your own. Don’t forget to visit the famous centenary oak tree, one of Gondesende’s ex-libris. 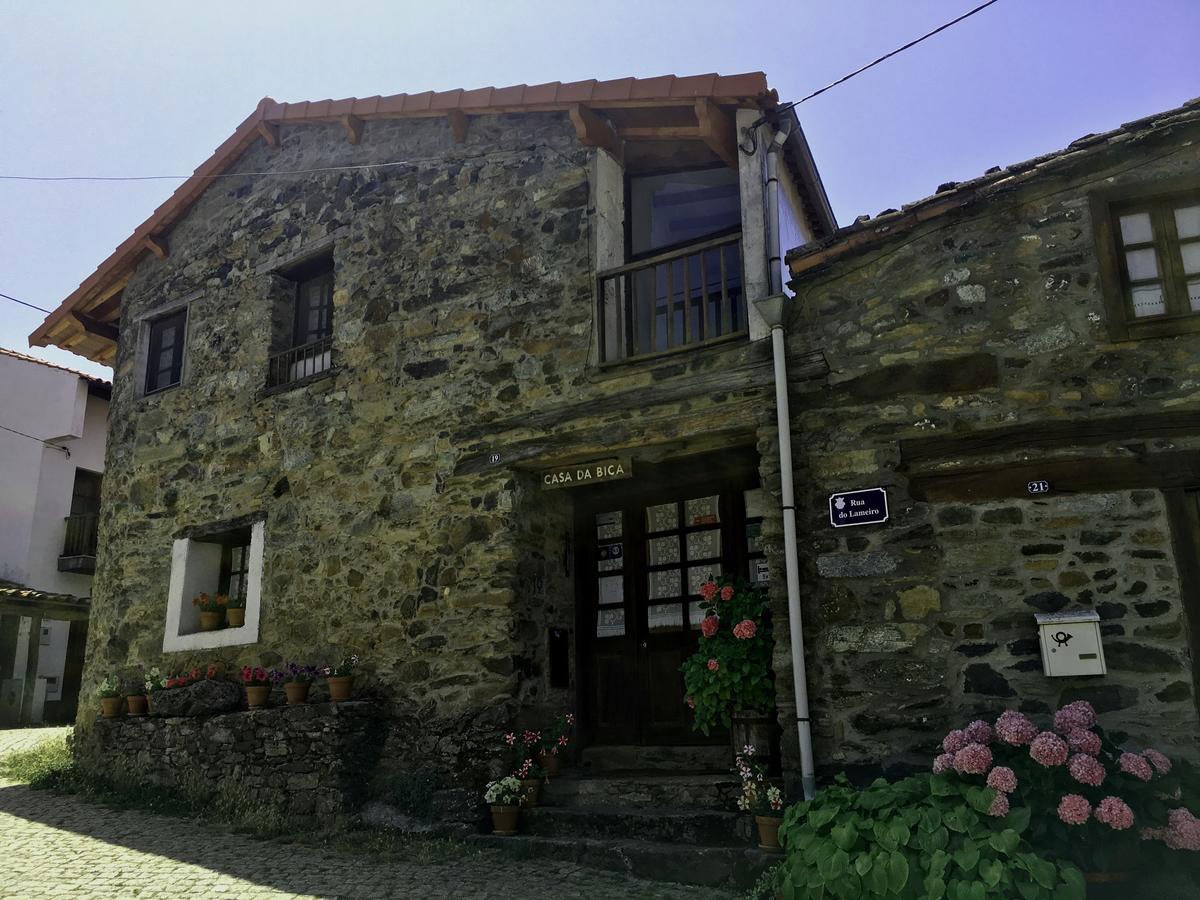 Located at the southeast end of a broad plateau, between the northern foothills of the Serra da Coroa. It is situated on the lane, next to the right bank of the river Tuela. In this parish is located one of the foothills of the Penedo dos Três Reinos, which once marked the border between the Kingdoms of Portugal, León and Galicia. Moimenta is a parish headquarters, and stands out for its size and characteristics of granite buildings, is about 24 km from Vinhais.
The church of Moimenta, seen from the outside, stands out in all the architectural ensemble. The main façade, with its simple lines, contrasts with the magnificence of the Romanesque square towers and the artistic elegance of the granite balustrade among the flakes of its straight bases. It must be one of the largest temples in the region, probably the largest parish church of Vinhais lands.

The Sanabria Lake Natural Park, created in 1978, is located in the far northwest of Zamora Province, bordering Galicia and Portugal, very close to the Montesinho Natural Park. It covers a landscape that was modeled by the action of the glaciers of the Quaternary Era.
From its high peaks (Peña Trevinca – 2124m) several glacial tongues of impressive size have been dislodged which, on retreating, left deep U-valleys, morays and an important set of lakes. Among them is the Sanabria Lake. With a surface area of ​​368 ha, it is the largest glacial lake in the Iberian Peninsula. 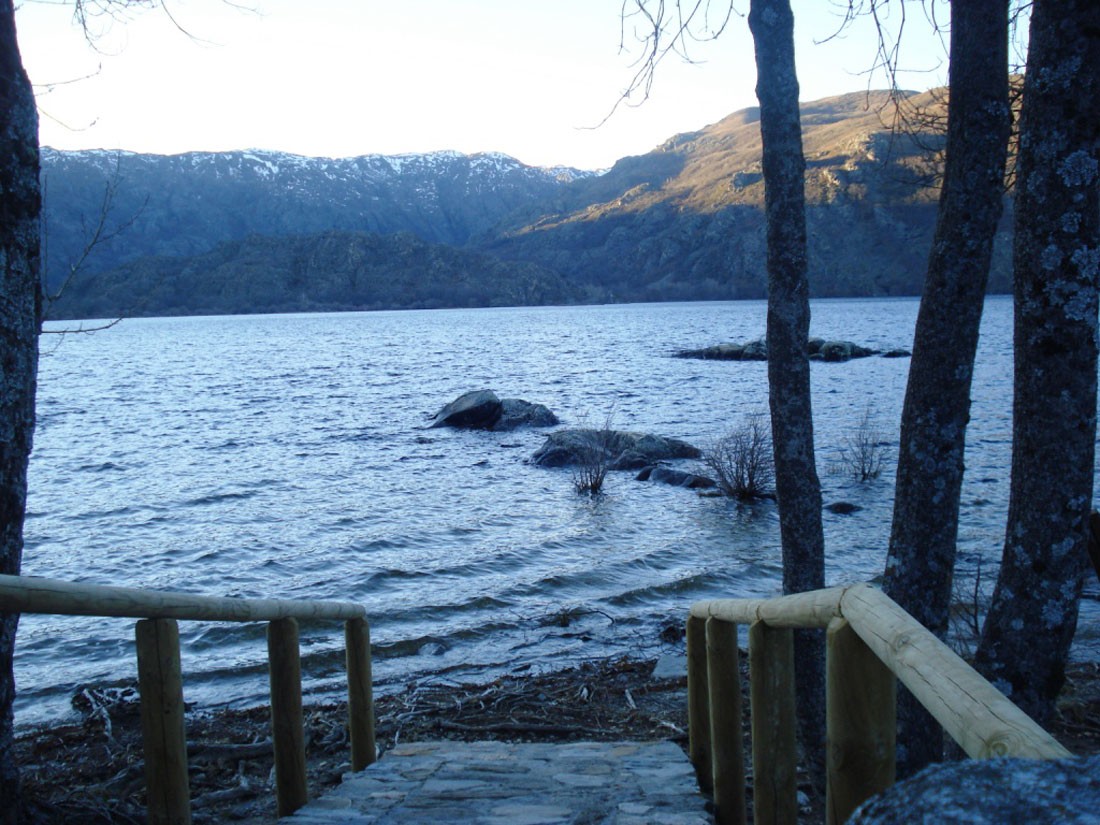