Go check out part 1 of this article if you haven’t!

Portugal’s remarkable period of conquest and exploration, the Age of Discovery, is re-enacted with astonishing effect at this slick interactive museum and theme park.
The perilous voyages of 15th-century Portuguese navigators, setting sail in fleets of fragile caravels to chart unknown waters and map new lands, are brought to stunning life through a series of detailed exhibitions and screened animations.
But the real adventure begins after boarding a boat and journeying to countries discovered by the likes of Vasco da Gama, who in 1498 mapped a sea route from Portugal to India, and Pedro Álvares Cabral, who reached Brazil in 1500.
Wearing audio headsets, passengers are regaled with the planning and organization underpinning these ambitious maritime expeditions and also glean a fascinating insight into the history and culture of the various destinations colonized by the Portuguese during this period.
In fact, this is a wonderfully engaging and educative experience and good fun for all ages.

Plastering the exterior of Porto’s 18th-century Carmo church is a blaze of blue and white azulejos (tiles), and the striking façade is one of the most instantly recognized in the city.
The immense panel is a real head turner, but the splendid gilt carvings that decorate the interior are equally appealing. In fact, the elegant golden-brushed woodwork is among the finest examples of Portuguese Rococo.
The neighboring Igreja das Carmelitas is less of an eye-opener. Incredibly, dividing both is a house, built to comply with an ancient law that stipulated that no two churches were to share the same wall.
Many believe this to be the narrowest private residence in the country, although it’s been unoccupied for nearly 30 years. A whimsical anomaly, the one-metre wide abode makes for an interesting snapshot squeezed as it is between two granite monoliths. 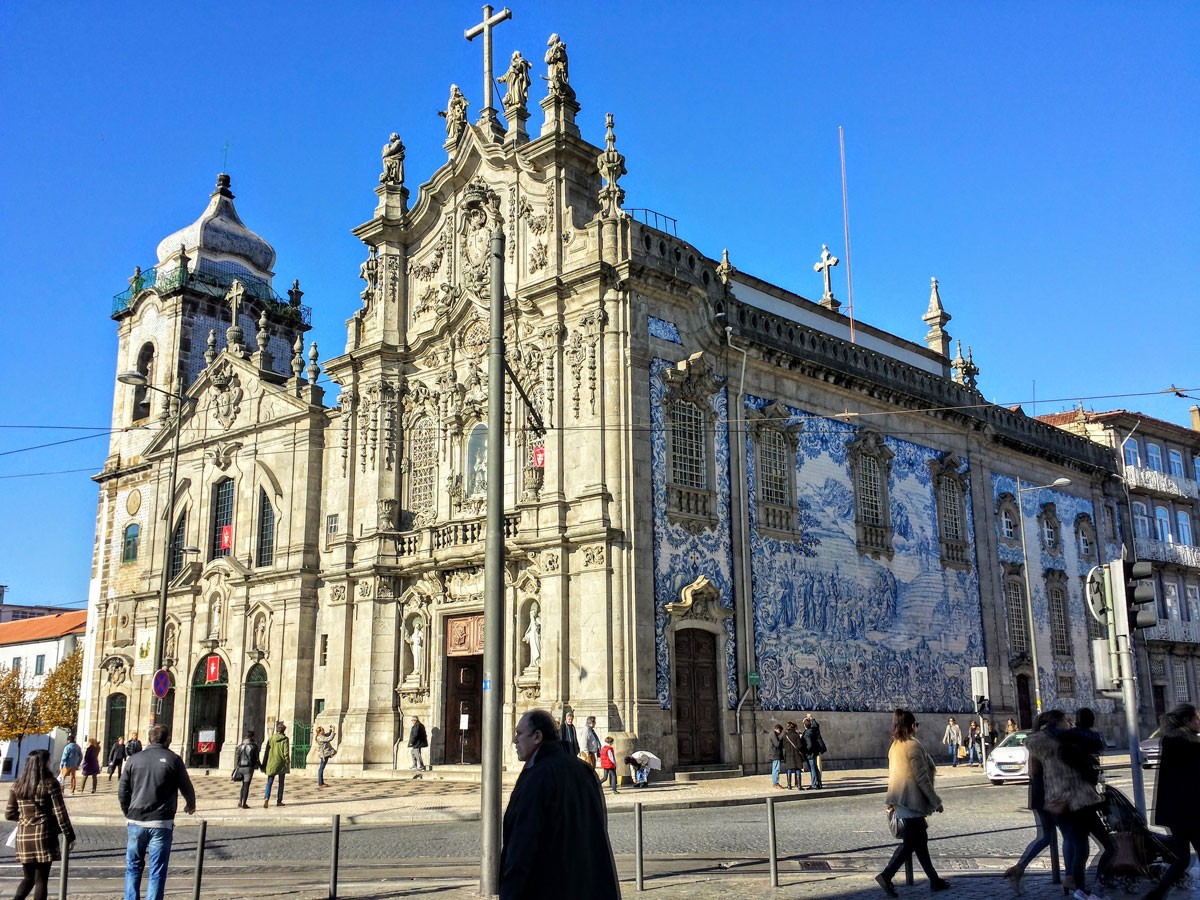 Anyone staying in Porto for a few days should check out the cultural program on offer at this fabulous international concert venue. The ‘Music House’ is celebrated as much for its radical design as the calibre of the entertainment it hosts.
Dutch architect Rem Koolhaas kicked convention into touch when he was commissioned to create a building that would propel the city headlong into the 21st century.
This he achieved to great acclaim, and the best way to appreciate his triumph is to attend one of the many gigs staged within its bleached, odd-sided skin. All musical tastes are catered for, anything from classical and fado, to jazz and hip-hop.
World-class acts performing here include the late Lou Reed, who played the opening night back in 2005. Another way to glimpse the interior is to walk up to the top-floor restaurant.
On the menu of Mediterranean influenced cuisine is an inspiring panorama across Porto’s busy Boavista neighborhood. But for an unhurried, up-close-and-personal view join a guided tour.
Otherwise, amble over here at dusk when the venue is washed with floodlight for a truly abstract perspective of this extraordinary structure.

The influential Serralves Foundation runs Porto’s highly respected Contemporary Art Museum.
Designed by minimalist wizard Álvaro Siza Vieira, the chalk-white building is itself a cultural draw, an example of subliminal ergonomic architecture set in a verdant, meandering park four kilometers west of the city center.
The museum has eschewed a permanent collection and instead aspires to offer different perspectives on contemporary art in various media.
This all adds up to an exciting and unpredictable visitor experience where, very often, you’re left to make your own mind up about the meaning behind each piece and the intentions of the artist – in other words, this is modern art.
Also set within the grounds is the pink Art Deco Casa de Serralves where other exhibitions are held. Discussions, arguments, and points of view can be exchanged in the on-site café or the more formal restaurant. The park is quite beautiful, a landscaped Eden of tremendous biodiversity.
A series of footpaths snake through the 18 hectares, winding past spruce lawns, ornamented lakes, and aromatic herb gardens before circulating through a shady, wooded copse. 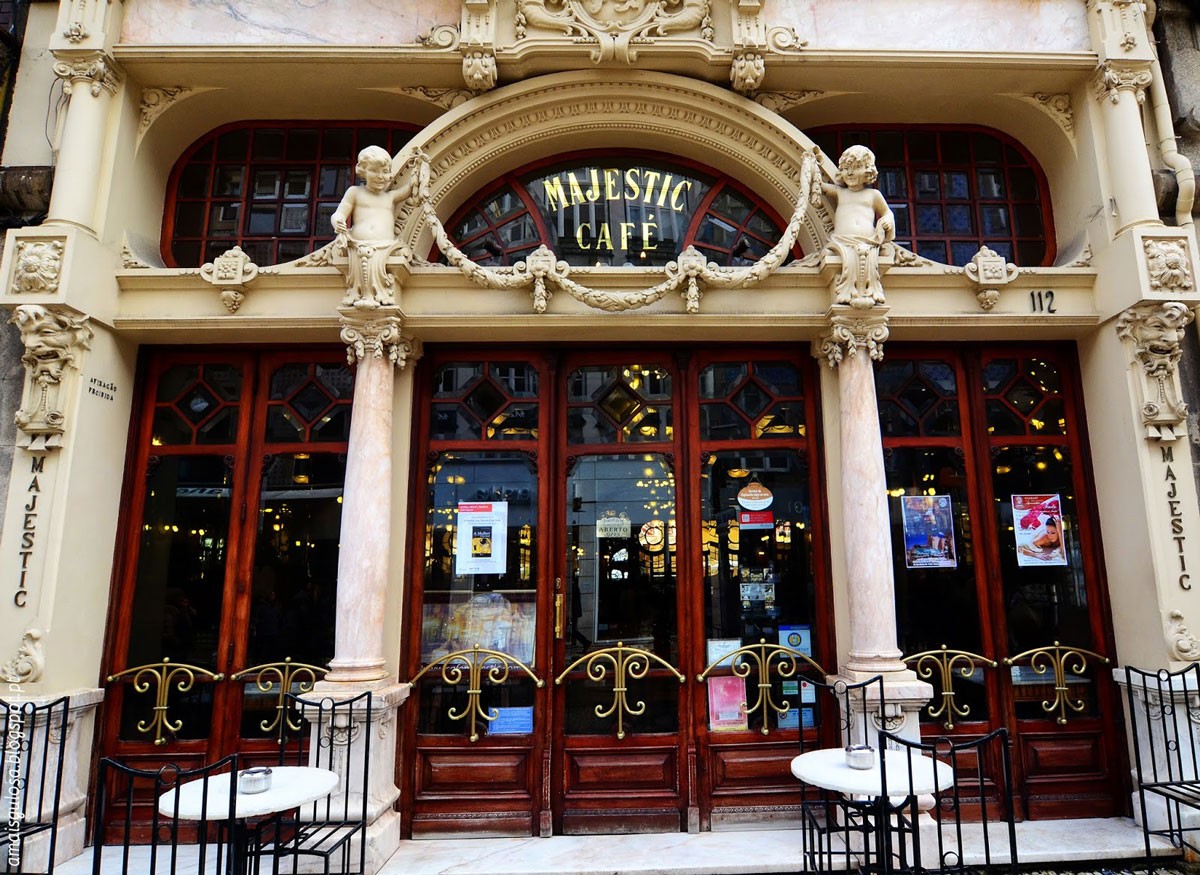 With its distinctive Art Nouveau façade of curvaceous stonework and undulating motifs, this sparkling gem of a coffeehouse is unmistakable. Inside, a vintage 1920s ambiance percolates the salon.
Arranged throughout the lavish interior are the original carved wood chairs and marble-topped tables that lend Majestic its delightfully bohemian flavor.
Cherubs and lamplights cling to the plasterwork ceiling. Gracing the walls are sets of huge Flemish mirrors that reflect the evocative, yesteryear character.
This is the most celebrated of Porto’s cafes, and one of Europe’s most historical. Lunch and dinner can be taken here in considerable style, the menu tempting with a fusion of Portuguese and Mediterranean flavors.
The café is also known for its cakes and pastries selection, and conjures up specialties like French toast smothered in a creamy egg custard topped with dried fruit.
Kids will love it here, especially when they realize that author J.K. Rowling worked on the draft of her first book Harry Potter and the Philosopher’s Stone while sipping coffee at a table near the entrance. Magic, or what?

The Portuguese Center of Photography will appeal to anybody with an understanding of the photographic process. This engaging cultural facility is set within the walls of a former 18th-century prison, the Cadeia de Relação.
The jail was closed in 1974, but its labyrinth of cells, various administrative offices, and the inner courtyard were all carefully restored and now serve as unusual exhibition spaces.
Exhibitions tend to focus on vintage and contemporary Portuguese photography, but a number of international photographers have seen their work exhibited as part of cultural exchange initiatives.
Interestingly, photographs created digitally and those taken using traditional analogue methods share a more or less equal platform, so purists and fans of new imaging technology will be equally enthralled.
Most visitors, however, will be fixated on the collection of antique cameras and photographic equipment housed on the top floor. After musing over the miscellany of antique Linhofs, classic Leicas, and evergreen Kodaks, taking a photograph using a telephone will seem faintly ridiculous. 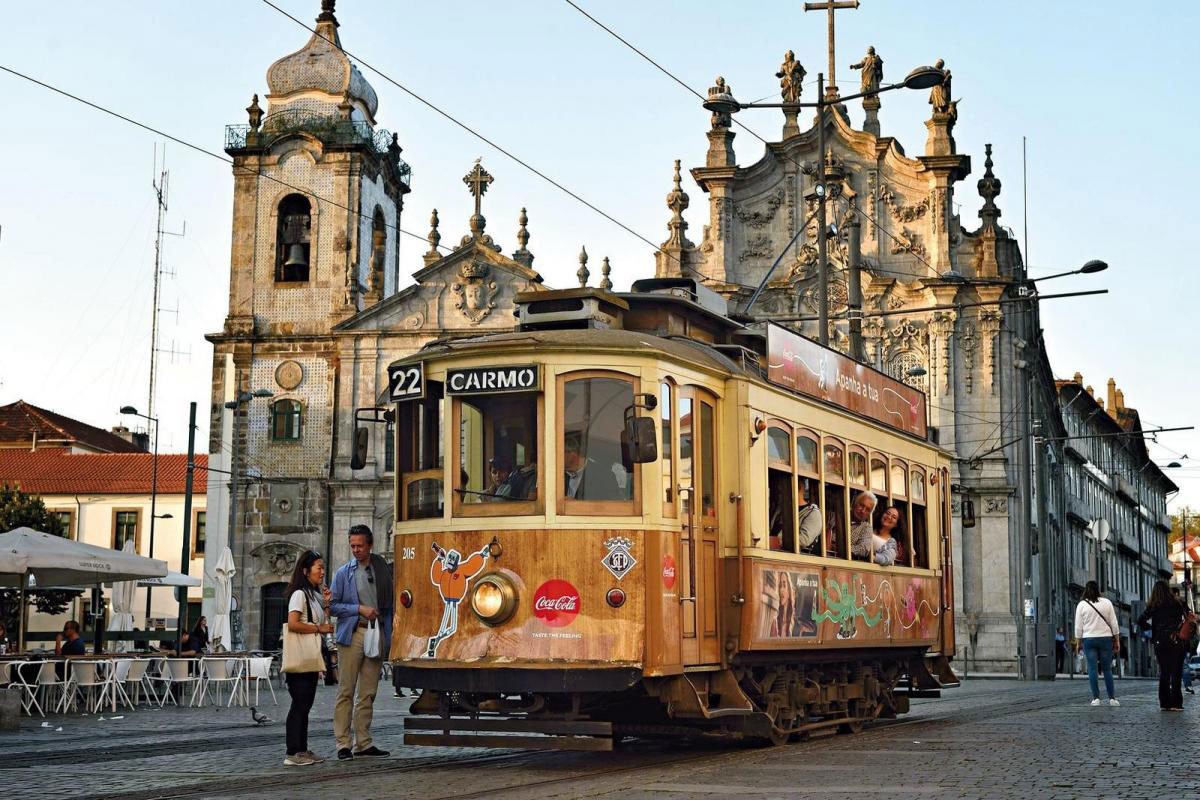 Porto’s historic center and the riverfront can be admired from a vintage tram during tours that take in several emblematic sights and cultural landmarks.
Three different lines serve the destination, all offering a different perspective on Portugal’s second city. Line 1 begins near Ponte Dom Luís 1. Depart from here on the “Riverside Line” to trundle west all the way to the coastal town of Foz do Douro, situated at the mouth of the River Douro and known for its nearby beaches and coves.
This leisurely excursion is a favorite option in summer when you want to escape the city heat. Line 18 is restored track, part circular in design and the shortest ride. The route passes Igreja do Carmo and ends, suitably, at the Museu do Carro Eléctrico, the tram museum.
Arguably the most rewarding circuit in terms of sightseeing and attractions is the Line 22 tour. On this route, the streetcar clatters and hisses past Torre dos Clérigos, Igreja do Carmo, and Café Majestic, among other visual showstoppers.

A vibrant and entertaining overview of everyday Porto can be gleaned by strolling the length of this broad double avenue.
Lined both sides with shops, stores, boutiques, cafés, and restaurants, “Aliados” is the city’s clamorous commercial hub. At the foot of the thoroughfare lies Praça da Liberdade, but visitors can begin exploring by popping into the nearby Estação de São Bento, Porto’s central railway station, to gaze upon the 20,000 or so dazzling azulejos depicting early modes of transport and the history of Portugal.
A slow amble north will take you to the Câmera Municipal, Porto’s city hall, which crowns the top of the avenue. From here, turn right along Rua Formosa until you reach the covered Mercado do Bolhão.
This tumbledown two-tier market has seen better days, but still exudes an alluring, boisterous character and is the best place in town to buy fresh fruit and vegetables, meat, fish, household goods, and handicrafts.
If you’re traveling on a budget, stock up on cheese and freshly baked bread rolls and head back down the opposite side of the avenue to enjoy a picnic by the river. 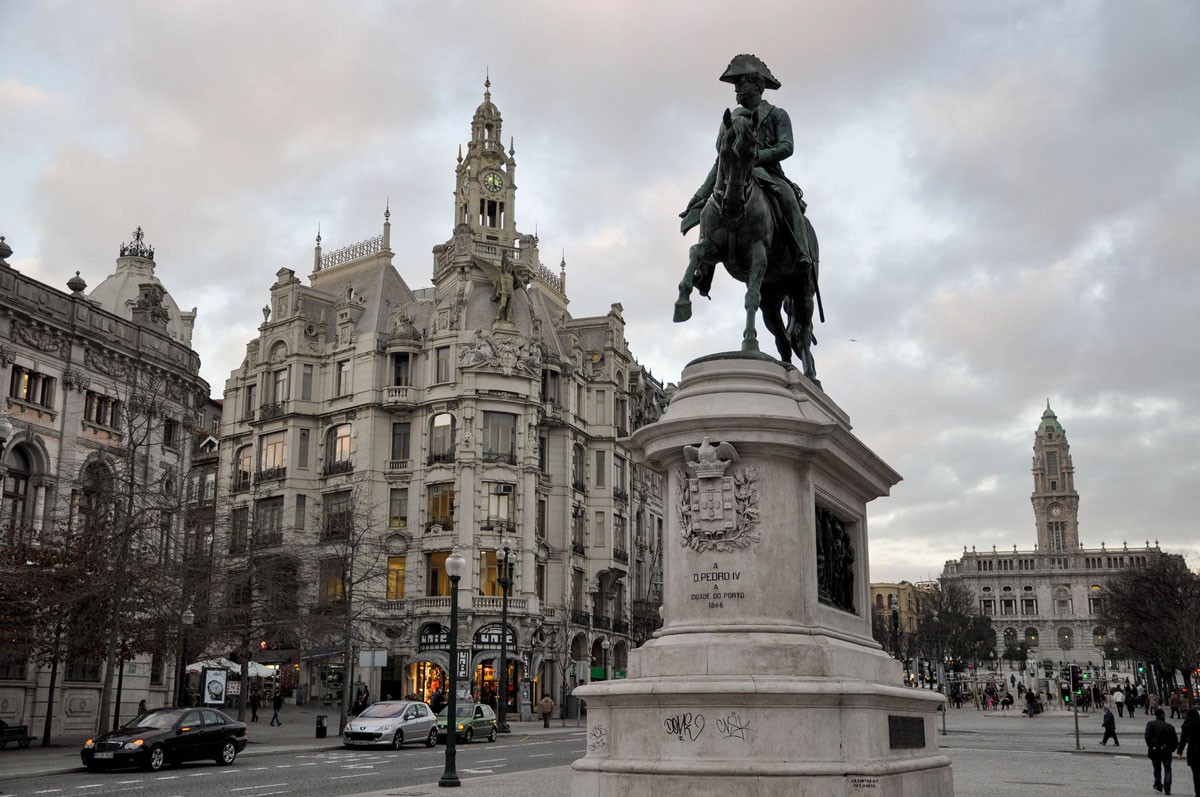